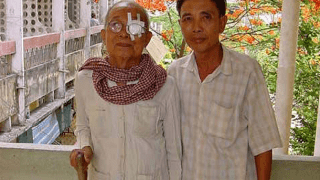 He did not know that his condition could be treated. He lived in darkness for four years and hardly left the house until he was visited by a health worker who told him that surgery could help him.

He had surgery at the Centre for General Health. His right eye is as good as new again and now he can go out and about again and help his wife in the house. This coming spring he will have surgery on his left eye after which he can probably go back to work.