This newly formed province, situated approximately 200km north of Vientiane, joined Laos as its 18th province in 2013. Until recently, the region was inaccessible to foreigners and Laotians from other parts of the country. The inhabitants, who rebelled against the government, were kept under control by the military. The sparsely populated area is inhabited by various minority groups such as the Hmong (55%), the Laolum (26%) and the Khamu (19%). As a result the region is rich in cultures and traditions. The mountainous terrain and poor infrastructure make the inhabitants very hard to reach. Eye exams and cataract surgery were carried out in the military hospital.

Since the region joined Laos as a new province, the district hospital in the city of Anouvan had to take over the role of the military hospital. The hospital therefore urgently needs its own eye care department. Until this has been realized, eye camps will be organized by the National Ophthalmic Centre (NOC) in Vientiane. For the regions’ poor inhabitants, who live spread out in remote areas, these eye camps are presently their only access to eye care. 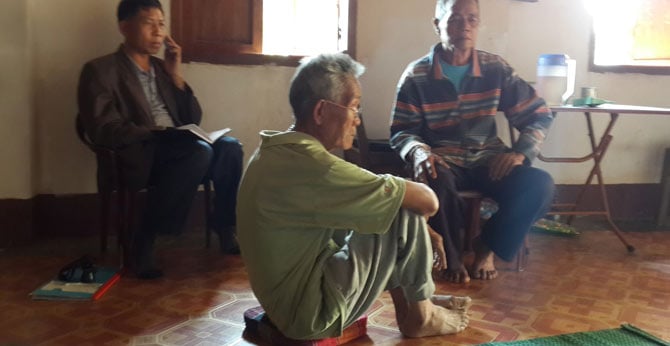 With the Eye Care Foundations’ help, an eye department with extra beds is being built in the district hospital of Anouvan. Two ophthalmologists and 25 ophthalmic nurses are being trained to work in the new province. Necessary equipment, such as a slit-lamp and ophthalmic instruments, will be donated. In addition the eye camps will receive support until one of the ophthalmologists graduates and starts work in the province.