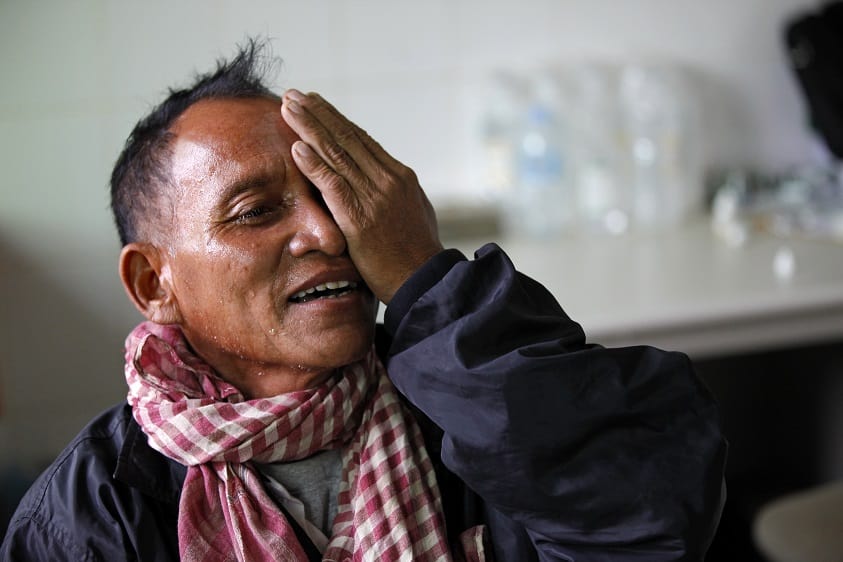 The only thing that Phoeurng Heng (58) wanted was to take care of his son Arun. This father is a strong man. But that day I saw a look of fear and sadness in his blind eyes. I saw a man who was beginning to give up hope. I had to speak loudly to Mr. Heng so that he could hear me. For the past few years he had been hard of hearing. In addition, his vision was seriously impaired. He had cataract in both eyes and he was gradually becoming a blind father. Life had not been easy for Phoeurng Heng since his wife died nine years ago. Every day he tried to stay strong for his son, but that was becoming more and more difficult. He told me that he felt very lonely because interacting with people from his village was difficult, since he could neither hear nor see well. He was also struggling with his work in the fields and worked so slowly that sometimes his boss refused to pay him. He was no longer able to buy enough food for his son and himself. There was no other option, than having his sun Arun work in the fields as well. He was only ten years old and he was no longer going to school, because he had to work.

“I am a father, I am still strong and feel young. And yet I cannot take care of my son.”

The province of Mondulkiri in Cambodia is a poor province. People live simple lives and have very little knowledge of health care and eye care. There is no ophthalmologist capable of performing surgeries in the province. In addition, people often don’t have money for surgery or to travel to the hospital. For this reason, Eye Care Foundation organizes so called ‘eye camps’ for people like Phoeurng Heng. That they can receive any eye care at all, is thanks to people like you. Funds are needed to set up these eye camps. We also pick up patients from home and bring them back the day after the surgery. This is necessary because most people in this area are not able to pay for transportation themselves. It comes down to this: for 35 euros we can operate and give one patient back their sight. After the last eyecamp, many patients like mister Heng regained their eyesight. Mr. Heng was given the opportunity to be the father he wanted to be again and Arun, who can now go back to school, was incredibly grateful to see his father happy again. “I got my father back”, he says.

“The operation has saved my son and me. I am eternally grateful. “ There are still many people who are needlessly blind in Mondulkiri. They can no longer care for themselves and their families. It is not in my nature to do nothing so I am asking for your help. The next eye camp will take place in May. But I can only help them with your support.

Dr. Hong wants to provide cataract surgery to patients who live in the poor province of Mondulkiri. But he can only do that with your support. The next eye camp will take place in May. I hope that you will donate a cataract operation to someone like mister Heng.