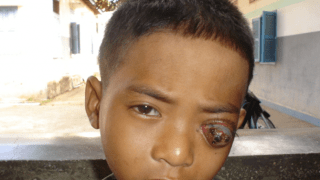 His name is Seng Seila and he is only ten years old. He lives in the village of Rolous, a hamlet in the jungle, in the province of Kratie. One of his eyes developed a white pupil. Gradually he lost his sight in that eye and felt increasingly more pain.

The eye grew larger by the day and bulged further and further outwards.

Unfortunately, an eye examination showed that he had a cancerous tumour in his eye. He urgently needed eye surgery and a blood transfusion. The tumour needed to be analyzed to determine the exact nature and origin of the cancer cells.

Luckily the Takeo Eye Hospital had the facilities to treat him, but his family had no money. Not even a single dollar in their pockets.

This child was very lucky, however. An American who worked in Chlong took him under his wing and later told us that Seng Seila is doing well.