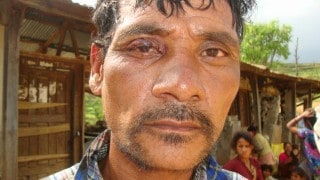 Santa lives in Simjung, a small, remote village in the Gorkha district, one of the areas most affected by the earthquakes. When the quake hit, Santa tried to get a plough from his home, but his house collapsed. He was buried under the rubble and was unconscious. The Nepalese army managed to get Santa out alive from under the rubble and brought him to the Gandaki regional hospital. Since he had also suffered an injury to his eye, he was referred to the Himalaya Eye Hospital. Ophthalmologist assistant Govinda Nath Yogi examined him: “He has a torn eyelid and needs to stay here for two days,” he explained.

Mr. Yogi was concerned for his patient. Santa has very little money and his family belongs to a low caste. He was wearing old, worn clothes and had shown up barefoot. Mr. Yogi spontaneously gave him his own T-shirt, trousers and slippers. Santa was also given an extra T-shirt and a cap by the hospital. Fortunately his treatment, food and accommodation were free of charge. Once Santa had recovered enough, a hospital employee brought him to the bus station and gave him money for the bus ride home.

Mr. Santa is just one of thousands of victims of the devastating earthquake and aftershocks. His village is home to between 50 and 55 families. Most of them are now homeless.