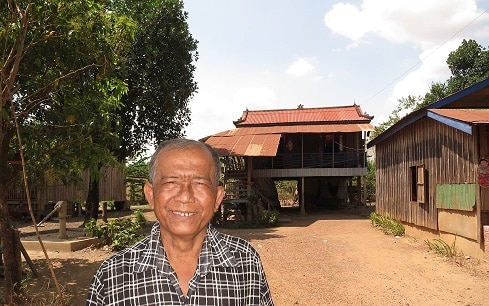 Chey Nein is a 68-year-old man from Mondulkiri, Cambodia. He has eight children, who are all married. He lives with his wife and his 96-year-old mother. Chey has been a farmer all his life. However, over the past three years he noticed that his vision was deteriorating. Working and even getting around and eating without assistance became increasingly difficult.

In November 2016, the ophthalmic nurse from the hospital in Mondulkiri conducted an eye examination and discovered that Chey Nein had cataract in both eyes. Later that month, a staff member of the Eye Care Foundation picked him up and brought him to the hospital for cataract surgery on his right eye. The surgery went very well and Chey was very happy that his vision had improved so much.

In early 2017, Leng from the Eye Care Foundation`s Cambodia office, visited Chey Nein for a follow up. Chey was walking around, doing some work around the house and preparing his own food. All with a big smile on his face. He is now also able to take good care of his old mother.