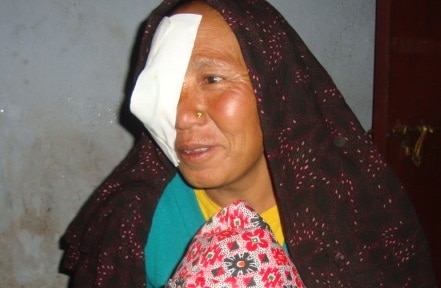 “My vision is better than ever! I can take care of my family again” For Ash, the first eye camp after the earthquake came just in time. Since her cataract surgery she can see  again. After last year’s earthquake in Nepal many people were left with eye injuries due to flying debris. Ash Gurung (40) was not one of them. For her the earthquake had a very different, unpleasant aftermath. Ash was six months pregnant with her sixth child when the earthquake came. Her village Barpak was devastated. The family survived the disaster, but their home did not. They lost everything they had.

There was nothing left of their village

The following months, the family lived under a plastic sheet. A few months later things improved a little and they got a corrugated roof, but then the monsoon season started. There was little to eat for Ash and the baby. During the delivery of her baby Ash had a serious haemorrhage. By some miracle they both survived this ordeal, but later she noticed that something was wrong. Within a few months she noticed a thick cloudy film forming on her right eye. Her vision became so poor that it was difficult to look after her six children in the rubble left by the earthquake.

She was only forty years old and she was going blind! How could Ash care for her six children? And how could she and her husband rebuild their home, their lives and their future?  Then she heard on the radio that an eye camp was going to be held in a nearby village. There, doctor Indra Man explained what had happened to her. She had a cataract in her right eye, which had progressed quickly due to the harsh conditions; poor diet, giving birth recently, haemorrhage, cold, hardship and stress. But fortunately for Ash, the eye camp had come just in time. After undergoing cataract surgery she could see again. The mother who had endured ordeal after ordeal was nervous before the operation, but that did not deter her. Now she can look after her family again. “My vision is better than ever”, she says. Ash and her husband are now rebuilding their home together.